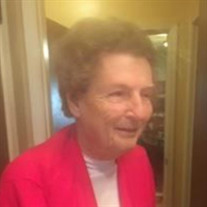 Billie Butrum, age 94, of Dalton, Went to her heavenly home on Wednesday November 11, 2020. She was born on October 10, 1926 in White County, Tennessee. She was a hard worker and enjoyed working. To the age of 85. She loved her family and really... View Obituary & Service Information

The family of Billie Butrum created this Life Tributes page to make it easy to share your memories.

Billie Butrum, age 94, of Dalton, Went to her heavenly home on...

Send flowers to the Butrum family.