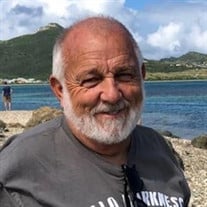 Cecil Cooper of Dalton Ga passed away Wednesday, October 7, 2020 in Panama City Beach, Fl. He was preceded in death by his father and mother Gerald and Mary Cooper and father in law Herman F. Neal. He is survived by his wife Judy Neal Cooper, son Jacob Cooper, son and daughter in law Zachary and Jennifer Cooper and the light of his life grandson Nolan Cooper, brother Raymond Bryant, and mother in law Sally Neal. Cecil grew up in Dalton Georgia and attended both Dalton High School, Dalton State College before enlisting in the marines. Cecil was a proud and decorated Marine, serving as a combat Sergeant during the Vietnam war from 1968-1970. He was an active frontline member of the daily task force. The only things that made him prouder than serving as a Marine, was being a husband, father, Grandfather and brother. For 49 years, Cecil was the dedicated husband and protector to the love of his life and best friend, Judy. They shared an enviable love that showcased their deep bond of soul. They navigated the highest highs and lowest lows hand and hand as a united team built on true love, caring and compassion. He was the proud father of two boys, Zachary and Jacob. Leading them with a mixture of toughness, love, and above all unwavering support. Also, always there for them beaming with pride in their highest highs, and sometimes to his chagrin, during their lowest lows. He was heavily active in all of his children’s activities from being his sons’ Boy Scout leader, Odyssey of the Mind coach, or baseball coach to name just a few. He was a favorite among his children’s peers, always reverting to his own class clown ways when participating to his children’s school activities. His knack for self-taught craftsmanship was highlighted in all of his son's school projects. Once his sons were old in the world, he continued to foster and create community by mentoring and looking out for people in the community both young and old. Cecil was of the upmost moral value with a strong sense of family and furtherance of others. Traits that are rare to find in this day and age. He would always be the first person to go to someone and say, “Hey, I thought you might could use this”. Collecting papers for the dogs at the pound to have something to lay on instead of the concrete floor, collecting bottle caps for St. Jude, any little thing he could do to help he wanted to. Many people in this community and communities elsewhere can all attest to that. He loved to help and be useful. He had an unparalleled work ethic. He worked and provided for his family and still would take all the time needed to find a way to be two places at once. In his past years during his retirement, he’d been spending more time at the home he shared with his wife in Florida. Even there his industriousness prevailed. Never one to sit idle, Cecil enjoyed spending his past years fishing, clock making, lamp building, yard working, gardening, and small electronics building. All his projects were sourced from used materials and repurposed antiques. He had the ability to build and fix anything and loved his time outside on his projects. His death is one that will be felt by many people. He always had the quickest wit and banter with the ability to light up a room. Cecil was the real “life of the party”. With his own sort of devilish grin; he always had the ability to draw a smile and laughter out of anyone. An adored, stoic man of great nature and respect has left this earth. Semper Fi. There will be a visitation at Dalton Funeral Home on Tuesday October, 13 from 12-2 followed by a graveside service in Westhill Cemetery. Arrangements have been entrusted to independently owned and operated Dalton Funeral Home, 620 S. Glenwood Ave. Dalton, GA 30721; 706-529-5371.

Cecil Cooper of Dalton Ga passed away Wednesday, October 7, 2020 in Panama City Beach, Fl. He was preceded in death by his father and mother Gerald and Mary Cooper and father in law Herman F. Neal. He is survived by his wife Judy Neal Cooper,... View Obituary & Service Information

The family of Cecil Cooper created this Life Tributes page to make it easy to share your memories.

Send flowers to the Cooper family.