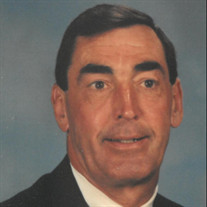 Charles “Eddie” Moncrief of Dalton, Georgia peacefully passed away on Sunday, August 8, 2021 at the age of 85. Eddie was born on April 24, 1936 in Moultrie, Georgia. He attended Moultrie Highschool where he played basketball and football. Eddie was voted into Colquitt County sports hall of fame. He graduated in 1954, and accepted a scholarship to play basketball for Clemson University. After college, Eddie joined the Air Force, where he continued to play basketball. He married his high school sweetheart, Lucina Joiner, and they were happily married for 58 years. Eddie is preceded in death by his wife, Lucina Joiner Moncrief; his parents, Ellis and Hazel Moncrief; and brother, Lawton Moncrief. He is survived by his son, Ed (Denise) Moncrief of Dunwoody, GA; daughter, Mary (Art) Fowler of Rydal, GA; and grandchildren, Sophia Moncrief, Alaina Moncrief, and Eddie Moncrief III. Eddie is known for his sense of humor. His passions included his family, church, and love of golf. A funeral service to celebrate the life of “Big Eddie” will be held on Friday, August 13, 2021 at 2:00 PM at the Christ Church Presbyterian. Reverend Eric Geil will officiate the service. The family will receive friends from 1:00 PM until the time of service in the church parlor. In lieu of flowers, donations can be made to Christ Church Presbyterian, where Eddie and Lucina were members. Arrangements have been entrusted to Dalton Funeral Home, 620 S. Glenwood Ave. Dalton, GA 30721; 706-529-5371.

Charles &#8220;Eddie&#8221; Moncrief of Dalton, Georgia peacefully passed away on Sunday, August 8, 2021 at the age of 85. Eddie was born on April 24, 1936 in Moultrie, Georgia. He attended Moultrie Highschool where he played basketball and... View Obituary & Service Information

The family of Charles "Eddie" Moncrief created this Life Tributes page to make it easy to share your memories.

Send flowers to the Moncrief family.