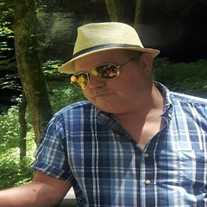 David Leroy Dale, age 69, of Dalton, Georgia stepped over into Glory on Friday, November 27, 2020. He was born on January 27, 1951. He was preceded in death by his parents, Robert and Nollie Dale; brothers, Monroe Dale and JR Dale; sisters,... View Obituary & Service Information

The family of David Leroy Dale created this Life Tributes page to make it easy to share your memories.

David Leroy Dale, age 69, of Dalton, Georgia stepped over into...

Send flowers to the Dale family.