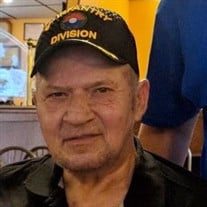 James Tilman Martin, age 74, of Collinsville, Alabama passed away Wednesday, March 4, 2020. He was born on February 27, 1946. James proudly served his country and was retired from the United States Army. He was preceded in death by his wife,... View Obituary & Service Information

The family of James Tilman Martin created this Life Tributes page to make it easy to share your memories.

Send flowers to the Martin family.