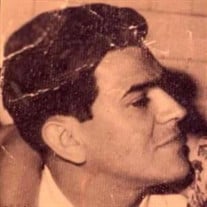 Pedro Luis Montealegre, age 81, of Dalton, Georgia passed away Sunday, February 28, 2021. He was born January 19, 1940. He was preceded in death by his parents, Aquilino Montealegre and Betulia Garcia; son, Osquitar Montealegre He is survived... View Obituary & Service Information

The family of Pedro Luis Montealegre created this Life Tributes page to make it easy to share your memories.

Send flowers to the Montealegre family.