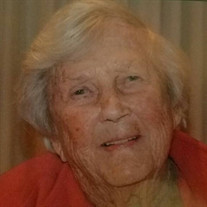 Peggy McBride Sample, 91, of Knoxville, Tennessee, died October 26 in Dalton, Georgia, following a brief illness. The sixth of ten children born to Robert Bascom and Olive Martin McBride, Peggy was born on February 22, 1928, in Murfreesboro, Tennessee, and graduated from Central High School in 1945 where she excelled in academics and athletics, competing in basketball as an All-Region standout. Peggy earned a bachelor’s degree in Physical Education from the University of Tennessee in Knoxville and taught at McMinn County High School in Athens, Tennessee, for two years before enrolling in the Teachers College of Columbia University in New York. There she earned a Master of Arts in Physical Education and Rehabilitation and also student taught in the New York City public school system. From 1953-1955, Peggy worked in Special Services for the United States Army and was stationed in Ulm, Germany, where she met her future husband and fellow Tennessean Charles Maynard Sample. She married Charlie in 1955 and the two lived in all sections of the state during their 53-year marriage. Known for her love of birds, animals, and nature, the “Bird Lady” had many passions, including refinishing and building furniture, creating jewelry and wire sculptures, designing birdhouses and wooden churches, casting concrete birdbaths, cooking, reading, bird watching, gardening and decorating. An exceptional tennis player, Peggy played competitive tennis regularly until the age of 85 and played her last match on her 88th birthday. At the age of 80 in 2008, she and her tennis partner won the Tennessee State Closed 70s and Over Tournament. In the mid-1980s, she and another tennis partner won the Southern Nationals Tennis Tournament in the 55 and Over category. Peggy established many close friendships during her lifetime and shared an especially close bond with “The Tennis-see-ns,” a group of talented tennis players who played weekly matches and enjoyed tennis beach vacations in Hilton Head, South Carolina, for the past 28 years. She returned from her last beach vacation with those friends one week before she died. She was preceded in death by her parents, her husband, and seven siblings, including Robert Martin McBride, Virginia McBride Gilkerson, Frances McBride Corral, Margaret McBride Waechter, John Newton McBride, Richard Willis McBride, and Patrick Henry McBride. Other family members who predeceased her include Rachel and Perk Cooper of Clinton, Tennessee. Survivors include her daughter Jane Sample (Taylor) of Dalton and grandchildren Charles Robert Taylor of Honolulu, Hawaii; Patrick Conner Taylor (Jessica) of Atlanta, Georgia; and Lucile McBride Taylor (Kelly Donaldson) of Prescott, Arizona; great-grandson, Clayton Donaldson; former son-in-law Rev. Charles Dean Taylor of Atlanta; her sister Rose Parker (Wally) of Nashville, Tennessee; her brother James Porter McBride (Maxine) of Newark, Ohio; and sisters-in-law Mickey McBride of Charleston, South Carolina, and Rosalee Martin Landry of Maine. She is also survived by numerous nieces and nephews. The family would like to thank the staff of Park View Retirement Center in West Knoxville, her caregivers in both Knoxville and Dalton, and the nurses and staff of North Georgia Community Hospice, who provided excellent care for her during her final days. A private memorial service will take place at a later date. In lieu of flowers, remembrances can be made to The American Cancer Society. Arrangements have been entrusted to independently owned and operated Dalton Funeral Home, 620 S. Glenwood Ave. Dalton, GA; 706-529-5371.

The family of Peggy McBride Sample created this Life Tributes page to make it easy to share your memories.

Send flowers to the Sample family.