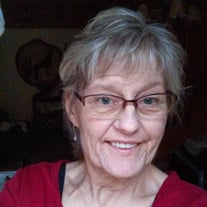 Sharon Rene Teasley 2/5/58 – 4/20/21 Sharon R. Teasley, age 63, passed away on Tuesday at home with her family. Sharon fought a long and difficult 3-year battle with ovarian cancer. Her son, Jarret (a retired veteran), was continually by her side throughout the illness. In the end, she was surrounded by her family, traveling far and near, to minister to her and share her love. To know Sharon was to know love! She had the sharp mind of an accountant but the spirit of a flower child and the forgiving heart of a saint. Her love will live forever in the hearts of those whom she held dear. Sharon was born in Colorado but grew up in Germany, Oklahoma, and Colorado. She had two children, Steven & Jarret, also born in Colorado. Sharon and her brother Jerry worked together at Plastron Plastics where she became a supervisor and met her husband, Frank. When the Georgia branch of Plastron closed, Sharon put herself through college to get a degree in accounting in preparation to open a home business. Sharon and Frank started Spectrum Home Services, built a lovely home, and enjoyed boating, water skiing, traveling to world beaches, and RVing to the mountains of Colorado. One of Sharon’s favorite trips, though, was one she accomplished by herself after Frank passed. The summer of 2017, she packed up her two dogs, cat, and grandchildren, Greyson and Lillith, whom she adored. With everyone in tow, Sharon bravely started up the RV and made the long trek to Colorado to see her sisters, Connie and Janet. Sharon had a lifelong history of achieving any goal she set her mind to. Sharon was born to Diana Dunfee. She is survived by her son, Jarret Henley; grandchildren, Greyson and Lillith Henley; son, Steven Mueller (Jeannie); siblings, Connie Stanton (Mike), Gerald Fritz (Tammy, Desiree’, Paz), Janet Lippincott (Mike, Danielle, Lotus); step-siblings (Daniel and Dana Fritz); and in-laws (Elizabeth/Witchit Jones, Betty and Jimmy Teasley). Sharon was preceded in death by her husband, Frank Teasley, died 9/3/15. Arrangements have been entrusted to independently owned and operated Dalton Funeral Home, 620 S. Glenwood Ave. Dalton, GA 30721; 706-529-5371.

The family of Sharon Rene Teasley created this Life Tributes page to make it easy to share your memories.

Send flowers to the Teasley family.