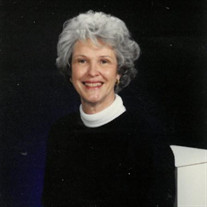 Virginia Fort Bailey, formerly of Dalton, Georgia, passed away peacefully on April 5, 2022 in Marietta, Georgia. Born on July 11, 1935 in LaGrange, Georgia, she was the only child of the late Raymond Woodfin and Norma Ector Fort. She graduated from LaGrange High School in 1953 and studied at Mary Baldwin College and the University of Georgia before returning home and graduating from LaGrange College in 1957 with a major in Psychology. After college, she moved to Atlanta, Georgia and worked as a receptionist at the Emory Winship Cancer Institute, a job she thoroughly enjoyed. Soon afterward, on a beach trip with friends, she met Robert E. Bailey from Anniston, Alabama and they married in LaGrange in 1959. In 1961, they moved from LaGrange with their young daughter Laura to Dalton, where their family would grow with the arrival of two sons, Brad and Rob. Virginia and Bob were actively involved in all of their children’s activities throughout the years and when recently asked what her greatest accomplishment was, Virginia replied “my three children”. Her children grew up happy and confident, knowing how much they were loved and respected by their parents. In addition to participating in her children’s many activities, Virginia was a kindergarten teacher at Dalton First United Methodist Church and a paraprofessional in the Dalton Public Schools for many years. She loved her students and they loved her. It was impossible for her go anywhere in Dalton without a current or former student excitedly recognizing and greeting her. Virginia was predeceased by her husband Robert E. Bailey and her son Marc Bradford Bailey. She is survived by her daughter Laura Bailey Friend and her husband Buddy of Marietta, Georgia, her son Robert Emerson Bailey and his wife Amy of Katy, Texas, her grandchildren Kayla Murray of Mobile, Alabama and Carson Fort Bailey of Katy, Texas, and her great granddaughters Livia and Leina Murray. She is also survived by her cousins Robert Fort of Woodstock, Virginia, Bettie Fort Edwards of Columbia, South Carolina, James Fort of Columbia, Tennessee, and Kaye Freeman of Atlanta, Georgia. The family will receive friends at Dalton First United Methodist Church from 1:00 until 2:30 p.m. on Thursday, April 21, 2022, following a private graveside service. In lieu of flowers, the family suggests memorial donations to Dalton First United Methodist Church, 500 S. Thornton Ave, Dalton, Georgia 30720 (www.daltonfumc.com) or Providence Ministries, P.O. Box 4598, Dalton, Georgia 30719. Arrangements have been entrusted to independently owned and operated Dalton Funeral Home, 620 S. Glenwood Ave. Dalton, GA 30721; 706-529-5371.

Virginia Fort Bailey, formerly of Dalton, Georgia, passed away peacefully on April 5, 2022 in Marietta, Georgia. Born on July 11, 1935 in LaGrange, Georgia, she was the only child of the late Raymond Woodfin and Norma Ector Fort. She graduated... View Obituary & Service Information

The family of Virginia Fort Bailey created this Life Tributes page to make it easy to share your memories.

Send flowers to the Bailey family.